The M15m transmitter is a crystal controlled on-off-carrier (OOC) transmitter designed for model rockets  but suitable for wildlife, balloons and  many other applications requiring a small,  frequency stable transmitter.  The transmitter works best with a receiver that has CW mode, however an FM receiver or scanner can be used if it has a S meter which can be observed during operation.  Transmitter ground range is approximately 400 yards (5 feet above ground)*.  Battery life is approximately 30 days of continuous operation.  Air to ground transmission range can be substantially greater than ground-to-ground range. Also the range can be increased significantly by using a directional high gain antenna or a more sensitive receiver.

*Field tests and range measurements were done with a ICOM 1032 transceiver with 0.16 micro volts of receiver sensitivity through the standard 8 inch antenna.

Power Supply
The transmitter is powered by one hearing aid/ watch silver oxide battery type 394.  Average battery life is 30 days with the 394 battery.

Receivers
To achieve adequate performance you will need a receiver with at least 0.16 micro volts of sensitivity.  Most 2-meter Amateur (ham) radios are at least this sensitivity.  Scanners may or may not be sensitivity enough.

Construction of the telemetry transmitter is straightforward.

NOTE:  Be aware that the small size of the circuit requires that GREAT CARE be taken to prevent solder bridges when soldering.  Use a 20 to 40 watt soldering iron with a pencil sharp point; trim all leads after soldering and check each solder joint with a magnifying glass for bridges and solid connection.

?         Please refer to the "Component Side View" illustration when installing parts.  All components are installed on the blank side of the board (not the foil side)

?         When installing components bend the leads to match the hole spacing.  Push the leads through the holes at the proper location being careful of polarity on the transistor.

?          Solder the leads on the foil side of the board being careful not to produce solder bridges.  Trim all excess leads immediately after each component installation

1.         If the crystal is not already installed on the printed circuit board (PCB), solider the crystal in place...

7.         Measure 3.25” of 22 gage magnet wire.  Using a knife carefully scrape the lacquer from the ends of the coil for about 1/2 inch.  Next construct the coil (L2) by close winding  4 turns of the magnet wire on the shaft of a 1/8"  drill bit shaft (or similar size form) and then slide the coil off of the drill bit shaft or form.  The coils should be tightly wound.  Solder this coil in place at location L2 making sure that the solder adheres to the bare portion of the magnet wire..

9.        The battery holder consist of two jumpers, made from the trimmed off resistor leads, soldered flat against the component side of the circuit board.  These two jumpers form the negative battery terminal.  The positive battery terminal is made from a small metal paper clip and arches over the top of the batteries.  The depth of the arch should just be high enough to allow battery to fit under it.  After the “hold down wire” is soldered in place the top portion can be crimped as shown in the “Parts Diagram” to increase the tightness of the holder.
Solder the two negative battery contact jumpers as shown (using leads from the previous  component  installations ).
Solder the “hold down wire” as shown.

11.     Install the counterpoise in the same manner as the antenna wire from the location indicated (opposite end of PCB from antenna).

12.     Because of varying operational parameters between transistors it is necessary to determine the resistance necessary to pulse the transmitter.  This is done by placing additional resistors in series with R1...

1.        Install the battery.  Confirm operation of transmitter. Note that due to variations in crystal frequency the actual frequency of the transmitter will be in the range of 147.455 and 147.565 Mhz.

2.        Further secure the battery by securing it to the PCB with several wraps of electrician’s tape.

4.        Stand in the middle of an open short grassy area.  Swing the transmitter by the antenna and throw it in the air (straight up).

5.        Verify that the transmitter functions throughout the flight and after bouncing on the ground.

6.        If transmitter still functions it is ready for use in model rocket tracking.

7.        The two most common problems encountered in the test are.

?         Poor battery connections.  Make sure the battery clip is slightly bowed and firmly against the battery terminal.

?         Antenna wire not soldered to the circuit board adequately (cold solder joint).

Operation
Have someone hide the transmitter and practice finding it before you use it on a mission. Note: there are several good references for radio direction finding (RDF) that you may want to read.  The ARRL Handbook has a chapter on RDF and can be found in most public libraries. Transmitter Hunting, by Joseph Moell, K0OV and Thomas Curlee, WB6UZZ is also a good book on the subject.  Both books can be bought from Amazon.com.

Radio direction finding is best accomplished by using a receiver with a directional antenna like a “beam” or “Yagi“antenna, however a monopole antenna can be used by employing  the “Body-Fade” method.   Instructions for building two good inexpensive RDF Yagi type antennas can be found at http://www.theleggios.com. You might also need an RF attenuator for when you get close to the transmitter, so check those out as well.

Body Fade:
If you use your body to shield the receiver’s monopole antenna a cardioid sensitivity pattern (see picture) is achieved.  The peak null position is approximately 180 degrees opposite the transmitter location. (Note that the patterns are not always as shown.  They can vary depending on the antenna, the way it is being held and objects in the area that may reflect the signal).

The operator should take a reading by holding the receiver close to their stomach   The antenna should extend vertically and be about 6 inches in front of the body.  Turn slowly listening for the strongest signal (loudest beeping) or highest reading on the “S“ meter.  Move in the direction of the strongest signal (opposite the direction of the weakest signal).  Periodically stop and take another reading, adjust the course and continue to work towards the transmitter.  Since the “null” point is much narrower than the maximum signal point it may be easier to use the “null” point to establish the most accurate direction to the transmitter.  With a little practice a person can become quite efficient in locating the transmitter although the path taken will be somewhat zigzagged. 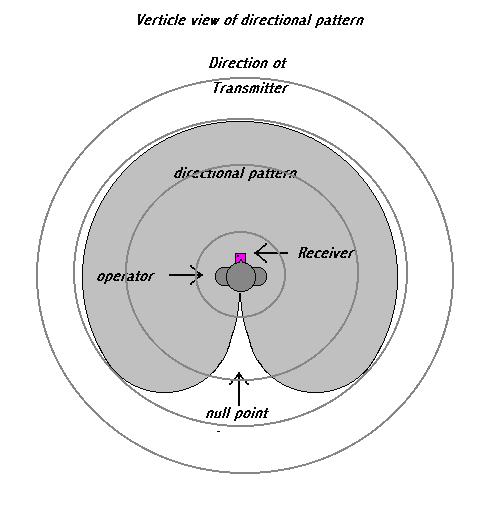 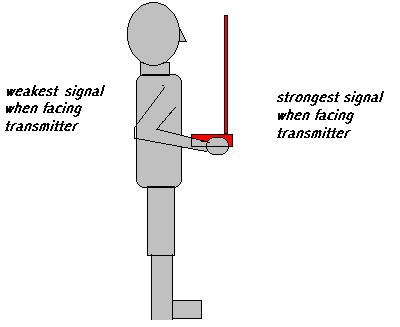 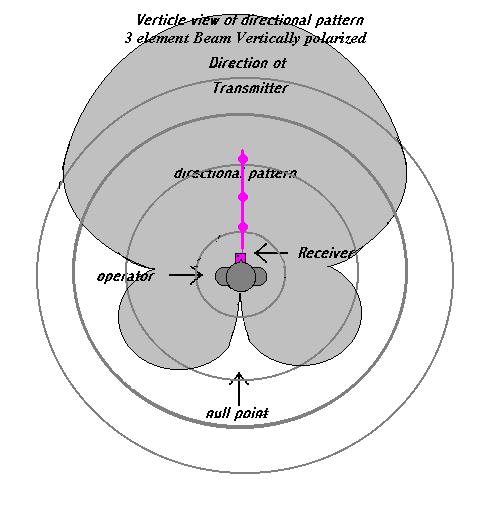 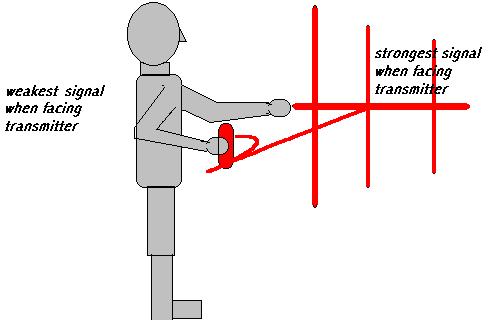 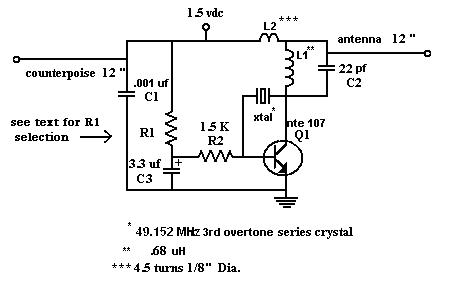 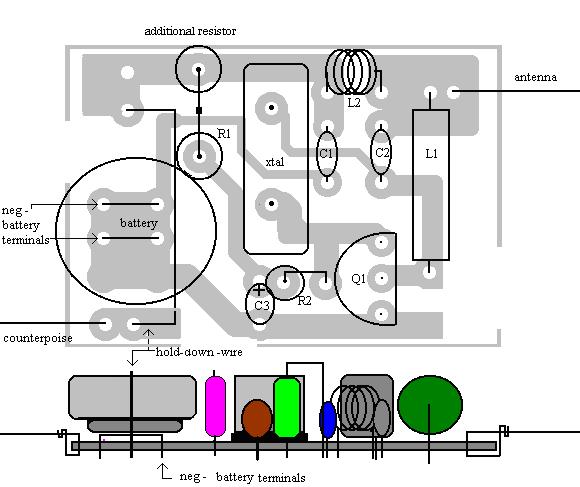 Additional resistors to be used to set pulse rate